Our MCAS medical brochure has been developed in collaboration with medical specialists in mast cell disorders. It includes the latest published consensus findings for diagnosing MCAS, alongside patient case examples and information on medical management.

Dr Bethan Myers recently presented her research on biomarker tests for MCAS at the British Society for Haematology meeting.

To watch a video presentation of her research click here.

We believe these resources will be helpful in understanding MCAS and providing practical advice for diagnosis and treatment of mast cell activation syndrome.

Where does MCAS fit in?

MCAS can be categorised as primary, secondary or idiopathic. Primary MCAS (known as monoclonal mast cell activation disorder) falls under the primary mast cell disorders category alongside systemic and cutaneous mastocytosis. These disorders are characterised by hyperproliferative mast cells. On the other hand, secondary and idiopathic MCAS are non-clonal. Secondary MCAS occurs due to IgE-mediated or non-IgE mediated allergic reactions while idiopathic MCAS refers to MCAS in which no allergic or autoimmune cause can be found.

HαTs is a recently recognised condition. It commonly leads to elevated serum tryptase levels due to an increased copy number of the TPSAB1 gene.

Recent advances in our understanding of mast cell activation–or should it be mast cell mediator disorders?. Expert review of clinical immunology.

The coding of MCAS into the ICD-10 (American version) is an important step in gaining better recognition of MCAS.

"New" tests for MCAS available in the UK

A comparative review of three paediatric case examples - could mast cell activation and mast cell mediators be a cause of the multiple symptoms experienced by children like Lily, Jensen and Caspyn? 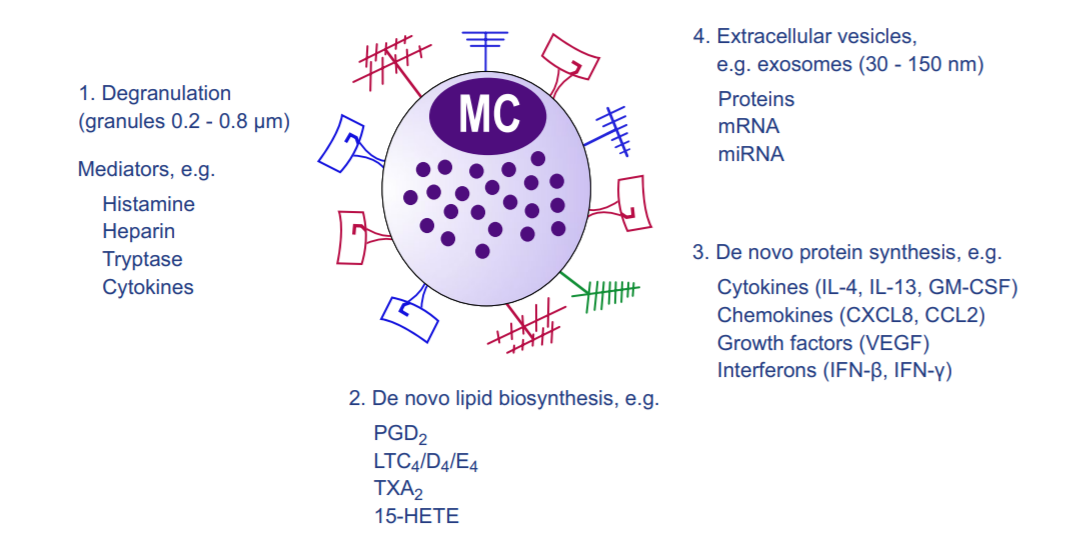 [A table of mast cell-derived mediators. While some mediators are preformed and stored in granules, others are synthesised de novo. Source: Castells 2006, Theoharides et al. 2019.]

[A diagram showing the different symptoms associated with MCAS and the mast cell-derived mediators driving these symptoms. Figure adapted from Theoharides et al. 2015.]

The following listed presentations are available to watch online and have been given by doctors and researchers across multiple disciplines who have specialised in MCAS.

The Royal College of GPs has developed an Ehlers Danlos Syndromes Toolkit that has a section on MCAS under Emerging Major Associations. The Toolkits have been created for primary healthcare professionals, patients and carers. These toolkits can be used to assist in the delivery of safe and effective care to patients.

Sign up to become a Friend of Mast Cell Action so we can keep you up to date on our progress and on how to get involved in our latest campaigns and initiatives. Please click on Data Protection at the bottom of the page to see our Data Protection Information.

Mast Cell Action relies entirely on the generosity of people like you. Please make a donation now and together we can make a difference for sufferers of MCAS.